Due to prevailing fears of bleeding, effective prevention of thromboembolic events through optimal anticoagulation remains a real-world unmet need.

Due to prevailing fears of bleeding, effective prevention of thromboembolic events through optimal anticoagulation remains a real-world unmet need.

Cardiovascular and metabolic diseases remain the world’s number one killer. More than 1 in 4 people worldwide die from arterial thromboembolic events (ischemic heart disease or stroke),1 – with incidence rates rising sharply over the past 20 years.2 Similarly, venous thromboembolism (VTE) represents a heavy health burden, claiming over 800,000 lives annually across the US and Europe alone.3 This is particularly the case in certain patient populations. For example the VTE rate in patients suffering from cancer is elevated 5 to 7 fold,4 representing the second leading cause of mortality across the entire cancer population.5

More than 1 in 4 people worldwide die from thromboembolic events 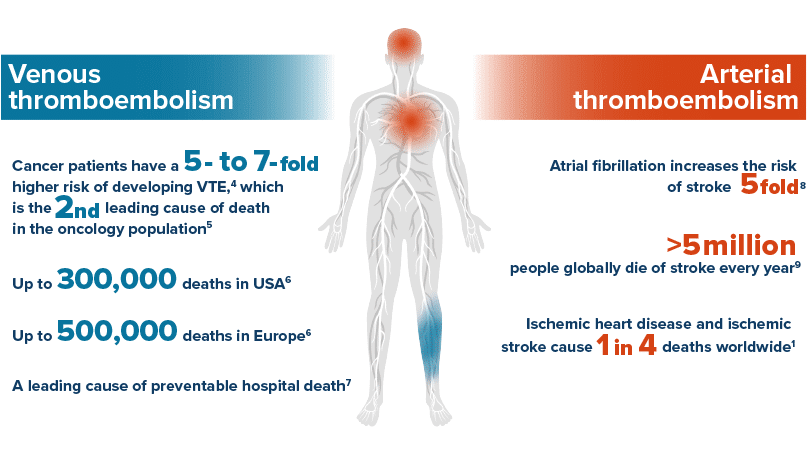 This immense death toll is due in part to the widespread underutilization, under-dosing and early discontinuation of anticoagulation, with as many as 40-50% of eligible patients left entirely untreated.10,11

The principal deterrent to optimal anticoagulant prescribing is fear of bleeding. While some controlled clinical studies with direct oral anticoagulants (DOACs) in tightly defined trial populations have shown improvements in the bleeding risk, their 2-5% annual rate of major bleeding12-16 remains clinically significant. Moreover, new data in atrial fibrillation presented at the 2021 International Society on Thrombosis and Haemostasis (ISTH) congress suggests that the rate of major bleeding in the real world is almost double that seen in clinical trials.17

The fundamental issue is that all conventional anticoagulants, including DOACs, impact physiological hemostasis as well as pathological thrombosis, forcing clinicians in the real world – where patients are often frail, elderly and encumbered with co-morbidities – to walk a tightrope every time, weighing up the twin hazards of lethal or life-changing pathology-driven thromboembolic events with the ominous threat of drug-induced major bleeds.

A key contributor to this immense death toll and morbidity is the widespread underutilization, underdosing and early discontinuation of anticoagulants…

Even with DOACs available, recent studies show no anticoagulation at all was prescribed to: 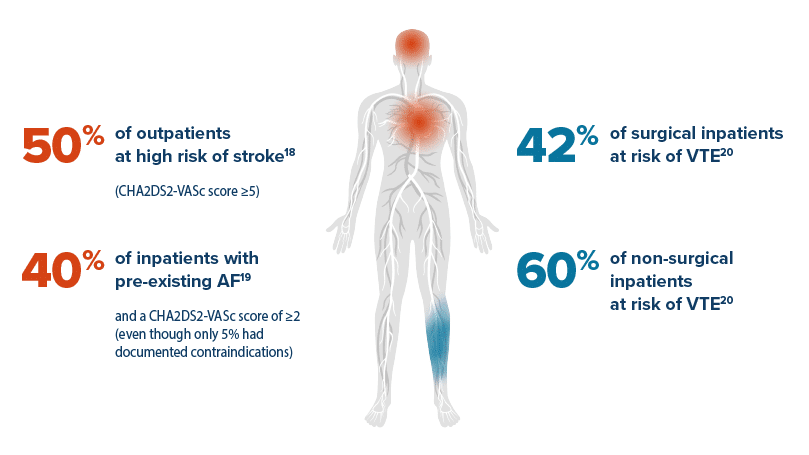 Watch: Find out what experts in the field think